Outdoor sports brand Merrell is launching a range of new P-O-P displays in February, to highlight its range of outdoor footwear. The fixtures will seek to create the feel of a Merrell store within the host retailer.
Developed for Merrell by Design4Retail, the units will be installed in Blacks stores, where the brand trialled apparel units from the same design group last year. The apparel units will now also be rolled out nationally.
The latest unit continues the outdoor graphics theme introduced in the trial, and uses clear acrylic blocks to allow "hero" products to stand out. There will also be clear holders, featuring the Merrell logo, to hold sales brochures, slatwall shelves with laser-cut logos, rubber floor mats and branded foot stools. A brightly-coloured display for children's footwear will also be available, as will a bus stop sign with double-sided outdoor graphics.
"We believe the Merrell brand can deliver trend-setting designs together with high performance features. We are at the forefront of the increasingly popular outdoor category, which has evolved into multi-pupose, go-anywhere shoes where function and fashion are just as important as design," says Merrell marketing manager Richard Codgbrook.
Gepost door Douwe de Keizer op 11:42 Geen opmerkingen: 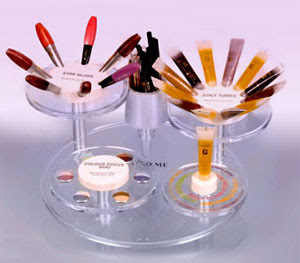 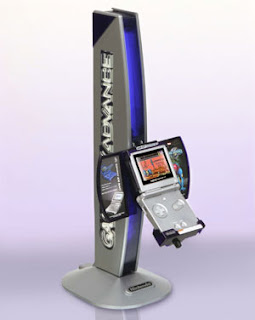 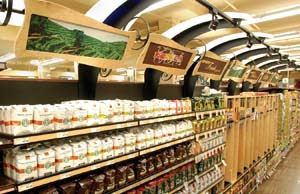 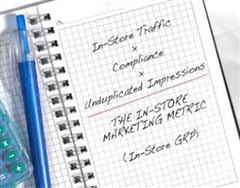 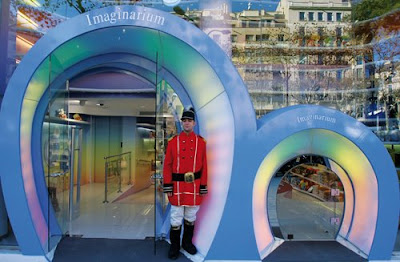 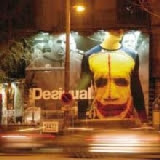 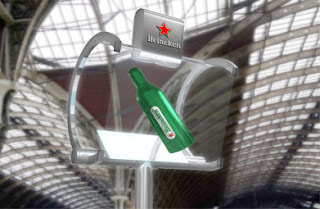 
Holographic Advertising 3D Displays by Holo FX
d.
AURA is a 3D holographic display medium designed for life-sized presentations. With its realistic human format, it can draw consumers close to a featured product exhibit." The company, Holo FX, claims it has "developed a line of exciting and innovative 3-D holographic display media for use in the advertising and display industries." Fairly new; the company was mentioned in July's Creative Online Weekly. 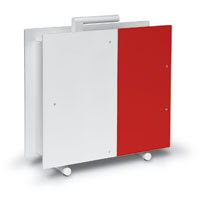 Consider this: A 2006-2007 study conducted by United Kingdom-based market research company Millward Brown and scent manufacturers Firmenich and Symrise showed that by spraying a scent, retailers can increase sales by as much as 19 percent.
Other studies have shown that consumers are more likely to linger in a store that smells nice, and increased browsing time raises chances that consumers will make a purchase.
Belangrijk, een goede geur kan mensen op hun gemak stellen en daardoor een langere tijd in de winkel zal doorbrengen. Langer blijven is meer kopen, toch?!


Here are the feelings evoked by some of the more common scents: 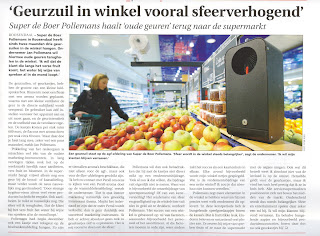 In the States wordt een "nieuw" medium getest. Ik schijf "nieuw" omdat ik het al eerder in Engeland heb gezien, maar dan als reclame materiaal voor de retailer zelf. Nu wordt het door een extern bureau geregeld.
Ik denk dat dit systeem gekoppeld zou moeten worden aan de signing in de winkel. Dan zou het ook hier kunnen slagen.
Retailers display contracted brand messages on overhead signs
By Craig Shutt
Dallas — Combustion Media introduces its program in January that uses changeable trapezoidal pylons hung from the ceiling to project brand messages and identify aisles. Combustion Media will install the systems and then sell space on them to marketers. Retailers are given a percentage of that revenue.
AirShow’s in-store media has been tested for the past year with a number of retailers and consumer packaged good companies, says Jennifer Howell, a spokeswoman for Combustion Media.
During a 12-week test with Frito-Lay in Albertsons supermarkets and Diamond Shamrock c-stores, for instance, the company experienced sales lift of 156%. Another test ran from Sept. 15 through Nov. 15 with Minyard Food Stores (including Minyard, Carnival and Sack ‘n’ Save locations) in Texas, with 140 units installed. The company collected IRI scan data to help identify specific results of the installations, she says. “We’ve been working toward this introduction for 18 months, with tests going on for the last year,” explains Howell. The backlit, trapezoidal markers are mounted to the ceiling and hang down to display one company’s messages on all four sides of the 2-foot by 2-foot or 2-foot by 4-foot shapes. The pieces are die-formed of 22-gauge cold-rolled steel with a 55-watt bulb for illumination run by an AC power cord that is connected to the store’s electrical grid. The high-resolution graphics can be changed easily thanks to the company’s graphic cartridge system.
The white interior frosted lens will not yellow and meets ADA requirements.
Combustion anticipates that about one to two signs per aisle can be used. At the Minyard’s test, each store featured 34 signs spread throughout. Retailers will receive 25% of the contracted media buy in exchange for the space they provide.
The company has contracted with Osram Sylvania to install the pieces, and Washington Inventory Services in San Diego will maintain the systems and provide weekly updates on their operation. As new graphics are produced (supplied by the marketer and formatted and produced by Combustion), they are shipped to the store and replaced in the cartridge, while the original graphics are returned via return shipping label. The system aids retailers in two ways, Howell notes. First, it creates a new revenue stream by bringing in funds from the rentals. Second, it will boost impulse sales on these products as it directs people to specific aisles and points out specific products, offering a highly visible aisle marker from many locations in the store. Combustion is working with 2,000 stores and about 29 brands, which have been testing the system in various ways for free. Most of those companies have indicated they will continue with the program on a contracted basis after it rolls out in January, indicating their satisfaction with what they’ve seen to date, Howell says. “We’ve received good feedback from the participants, and we’re looking forward to having a large commitment.”
Gepost door Douwe de Keizer op 22:25 Geen opmerkingen: